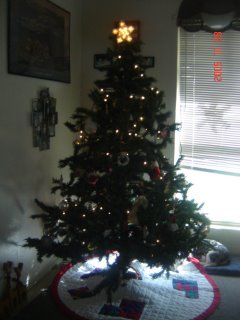 I'm really not ready for Christmas. I'd rather skip it really...It's too much stress. In regards to shopping, I've made my lists and I've checked them twice and I still think I'm forgetting someone. Ari and I decorated yesterday, after she fell asleep I had to move all the ornaments she insisted on hanging to taller branches because the tree was really bottom heavy and totally bare on top. Like the pic? It has ornaments on it from when I was in Kindergarten....those are the best kind.

I want to get Ari her own TV and V-smile, from Santa of course. If I do though she won't get much else as that would take most of my budget. It's really just a matter of deciding to get her few big things or bunches of little things. Personally my favorite gifts are baskets full o' stuff, with little things. I love that. Kids though, at this age, it's quantity over quality that matters so I'm having a hard time deciding.

I also wanted to show you the house my Mom and stepdad are building. It's on hold right now, obviously due to his illness but they've done everything so far BY THEMSELVES. No contractors, no help. Everything from foundation to plumbing was done by their 4 hands. I think it's pretty darn cute. It's the Hyatt compared to their beat up double wide that sits behind it. When it's done it's going to have a really cool 2nd floor open loft that my mom will use for office space/TV/playroom.
What you see is a shell though. There are no walls, flooring or anything on the inside. I hear my stepdad has a friend that rounded up some people to help him finish the house. I hope they do it soon, the bathroom in their current abode is falling through the floor. The toilet leans to the right about 60 degrees. I actually fear using it as I'm afraid I will end up under the mobile with my pants down mid peeing. It's scary really. Thankfully it does have another toilet that sits next to the cracking bathtub. 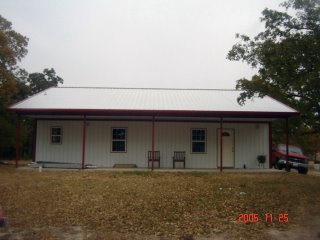 I actually volunteered to offer up my hands and time during the school break, but they refused. Saying with Ari I probably wouldn't get to do too much to be worth the trip and really the drywall and flooring will be covered.

What a cute little tv. I would probably do the at least the tv that you know she can use for years! I'm having the same delima about something for Jacob. I would love to get him one big pres, but i'd like for him to be able to have more than just that to open so I totally see your quality over quanity thing.

What a cute little house, (espcially knowing they built it themselves! That is awesome!) hopefully the other guys can help and get it done soon!!

Yeah, it's kind of a budget-conscious year for everyone.

I'm having a hard time deciding if I should let Jennifer pick three or four items off the dollar menu at McDonald's or just go hog wild and splurge on a few cans of tuna and some bread.

In all seriousness, I'm just as budget-conscious as everyone else this year. I have the most understanding girlfriend in the world when it comes to being budget-minded this year.

For this, I am truly thankful.

Someday, a Jaguar for her; until then, it's a calendar, some candles, some bath stuff, some gloves...and my love and devotion. (Although I think she'd rather have the Jaguar.)

I cannot stand the holidays, sorry to say...especially shopping. Thank god for the internet: Ordering gift certificates for folks from Barnes-n-Noble, Best Buy, etc., has been a savior for our nerves. People like getting what they want anyway, products of our consumerism.

Xmas in particular is more or less a holiday for kids. That's fine. I loved it as a kid; presents and more time to spend with Gramps and Nana (and the rest of our tribe). When you are young, there is something magical about it.