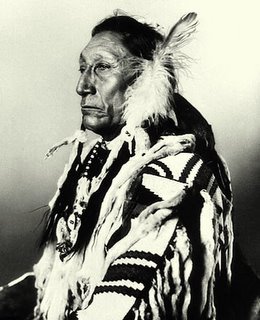 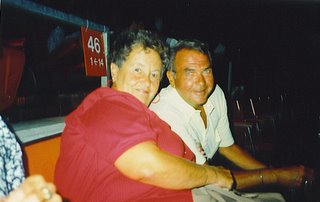 My grandparents, Anna and Terry aka
Bobo and Poppy 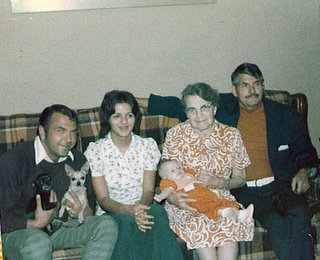 So, wanting to be a good parent and not one of those lame parents who never do things for their kids at school. (I know some are just too busy, really, I know) I graciously volunteered to speak about my "culture" and bring a dish related tomorrow in Ari's class. It's like international world culture day tomorrow or something. Anyway, when I volunteered I was struck with the dilemma of which culture shall I pick? I mean, really I am the human embodiment of the American melting pot. My Grandparents and great grandparents lineage covers several different nationalities. They are, in the order of familiarity; English, Native American/Blackfoot and Cherokee, German, Irish, French, Dutch, and Scot. At first I thought I would pick German as my mom and grandparents loved to make German food growing up and it's the closest I came to having another "cultural" influence. There was a lot of drinking beer from a stein as well. But then I thought maybe I would go the Blackfoot Indian route, as my grandfather who was very proud of that connection, & he looked the part (see pic) and would often take us kids to reservations up North to buy moccasins. He seemed to think it was just wrong for a kid in our family to not own a pair of Moccasins. I started doing a little research, asked my mom a ton of questions, and dug up my own copies of genealogy info my Aunt had done. So far I've figured out that my Great Grandmother Virginia Cayia was the daughter of a man who grew up on a Blackfoot reservation in Alberta, Canada. So that would make me 1/16th Blackfoot by my calculations. Still on my mother's side, my Grandmother's grandmother was 100% born and raised Cherokee, I have no genealogy info on that, only my deceased grandmother's word. I suppose that makes this very Anglo, blondish, freckled, blue-eyed American accumatively 1/8th Native American. I stand out like a bruised thumb on my mother's side and this is why.
So, in my very little free time, in the past 2 days, I've put together enough information to speak about 10 minutes, made little feather jewelry for the kids, bought some cornbread mix to make, and have a ton of pictures to show.I just need to put on my moccasins (yes I have some) & I'm all set.
*******************
I had 2 really good days in clinicals, witnessed 3 births, 1 c-section and 2 done the old fashioned way but with drugs.
Pretty awesome experience and I surprised myself with the 2nd one by getting all teary. I think it was the parents that did it though. They were young, both under 18, but during the whole process they were both so loving and sweet. Their tears of joy and excitement when that baby came out was so touching, I couldn't help but cry a little. They had a lot of family support, I think they'll be Okay. The other parents seemed happy but there was no crying and and it just wasn't that way.
I liked it, but I'm not sure I would go the L & D way after graduation. It was way too much "Hurry up and wait". Sure there's the excitement of the baby and the chaos around that but beforehand, the nurses let the parents rest and it's chatty chatty at the nurses station all day. Too slow and too boring for me.

We have a blonde blue-eyed Brothertown NA in the family whose Great Great Grandma was full-blooded and married a French man. It was his Grandma who finally married the Irishman. :-)

Think that makes my son 1/32 NA? (He comes by the Irish on both sides, mine and his Dad's)