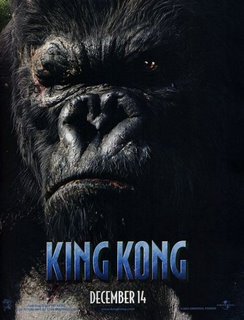 On my first day of 2006, I slept in....way, way in. You see, I am one of those people that will sleep and sleep and sleep if there is nothing (ie. an alarm or child) to wake me up. Ari is at my Mom's until Monday so I slept a good portion of the day away.

When I woke up, feeling pretty guilty about sleeping away New Year's day, I decided (after having my coffee) that I would clean my house thoroughly and remove all my Christmas stuff. I also decided that if I managed to do all of this in a timely manner, I would treat myself to the latest showing of King Kong. That I did.

Now I'm normally not one to be picky about movies. If there's just a few ounces of entertainment value in a movie I generally don't dislike it. I heard a lot of really good things about King Kong. The previews looked awesome. It wasn't, It was KING CRAP.

I will give the special effects ONLY a thumb up. That was the only thing worthwhile in the movie. Oh, and Adrian Brody, I love him, he's an excellent actor and his scrawny figure and rat-like face, for some reason, makes me all warm inside. I can't explain my attraction for that man so it must be his acting abilities, or maybe it's his intense demeanor.

However, the movie itself is not worth seeing. It's THREE hours long. The first hour and 20 minutes was character and plot development. The second hour, people running from beasts on the island. The third hour, Kong getting his ass whooped in New York. The dialogue was REALLY BAD. They gave way too much screen time to the bizarre love triangle involving Kong, Naomi Watts, and Adrian Brody. If they had cut 90 minutes out of the film and focused more on the island and New York, it might have been a good movie.

I know some, maybe a lot of you might disagree, but I just feel like I wasted three hours of my life.
But my house is clean, and my Christmas stuff is packed away in the garage. So the day wasn't a total waste.

Or maybe it's just I'm in a bad mood because I haven't had a smoke today. Yay me, poor Kong.
It's only 8 or 9 bucks, you can decide.

That Jackson's KING KONG is not a good movie is easy to agree with; I do.

But I don't understand the praise it receives from other people. It's like they're talking about a whole different movie than the one I saw (and nearly walked out of).

Is it because a cult director gets a free pass, no matter what he does? Well, I think he pretty much used up his free pass on KING KONG.

Definitely. I mean I loved the Lord of the Rings trilogy. Jackson did Tolkien justice.
I think Jackson was trying to make another epic over something that should have been left a lot more simple. Two hours long tops and he might have had a good movie, but it was just too much.

I don't think I'll be seeing that one lol!