A week in review

With school ending over 4 days ago, I've been such a slug. I guess the inertia of the semester ending has left me with a lack of energy so I've been sleeping a lot, catching up with my Netflix movies, and hanging out with Ari. We made a birdhouse for my Mom. It was from a kit I found a target and it was a lot of fun to put together. Ari even helped me hold the pieces while I nailed them together. Ari controlled the paint scheme and it's an interesting array of splotchy red, black, green, and blue. I think Mom will like it. It was freezing outside so we did the work on an old sheet on the living room floor. 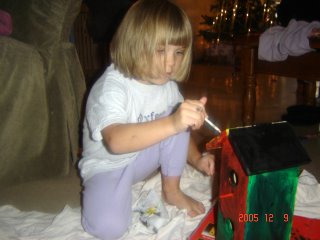 We also had Ari's class Christmas party which was over in like 20 minutes but Ari had a blast. I got to know one of the other parents a little better which was good. Even with the events I've attended, I've been unable to get too friendly with the other class parents. I didn't know if it was me or them. I usually make friends pretty easy so it was hard to tell. I can tell however that Ari gets along well with her classmates and seems to be one of the social leaders in the group. I like the idea of Ari having leadership qualities (she can be kinda bossy though) as I was always a follower in the group as a kid, never the leader. 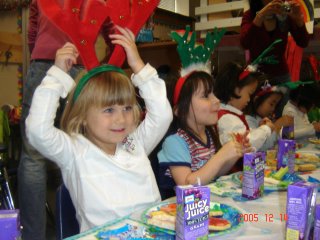 I watched a movie called Spooks and Creeps. It was a weird little movie collection of film shorts that had some kind of horror element to it. I got it based on the fact that Ewan Mcgregor was in it. I was sorely disappointed when I saw that the short he starred in (called Desserts) was about 5 minutes long and he doesn't even have any lines. (although it was the most gruesome in the film) I still can't tell if I liked the movie or not. Tonight I see Batman begins.

We have to go to Walmart in a few. I need to get a new filter for our gold fish tank which is green at the moment. Walmart has the multi-pack cheap. While I'm there I might as well get the food stuff we are out of...wish me luck, I'll need it.I know Walmart to be quite scary in the month of December.

I know you've heard it before, but I tried to quit smoking on Wednesday ...again. I have quit well over 20 times this year. I again failed and this time lasted until Ari's first tantrum of the day. I've decided I'm going to do what thousand of others are going to feebly attempt. I WILL quit on New Year's day. I WILL NOT start the fourth semester smoking. I joined an online quit group and will use the gum first and then the patch again if need be. My asthma is too bad and I simply can't do it anymore.

I swear Ari gets cuter every day! I love the birdhouse, I'm sure your mom will too.

Ari is gorgeous! Love that smile!

Dearest Jodi, Merry Christmas first of all. I had never smoked until college when my roommate was a smoker. I tried to get HER to quit and ended up smoking. Drinking and smoking seemed to fit together for me. When I got home from college, my internist freaked that I was smoking. He told me to drink a glass of water everytime I wanted a cigarette! He said I'd be doing TWO healthy things -- hydrating more and not smoking. It worked. I got so sick of drinking water that I felt like throwing up. I eventually quit drinking too because it lowered my inhibitions about smoking. I figured it was worth a try. On the Ari front, I have observed lots of parents. One way to get to know parents better is to begin a "building block" routine. Start with one of her friend's moms that she likes alot. Have her over, talk to her mom. This can pay dividends when you offer to keep her child with Ari so she can go out. This may help YOU when you are in a bind and need childcare help. Walt's mom works at a demanding job and has this worked out to a "T." Just thinking of you.....Take care. BTW, Ari is SOOOO pretty.

I know how it goes. When you're finished (for the moment) with something extremely stressful, all you want to do is treat yourself to some "you" time. So treat yourself. :) Good post! Enjoy your time off! And, yeah, I'm a smoker, too. I love it too much to do anything about it.

I'm a smoker too. I wish I had the willpoer to quit but it seems I don't, yet. When I was in the hospital and dying for a cigarette my doc got me the little white cigar tip looking things (it's a prescription, you probably know the name but I can't remember it right now) and it was a miracle worker. I used those the whole 7 days in the hospital. Too bad I lit one up as soon as I was out. When it's time for me to quit, I know those will work for me.
Good luck and enjoy your time off.
Ari is ADORABLE!!
Dawn