Twas the day after Christmas...... 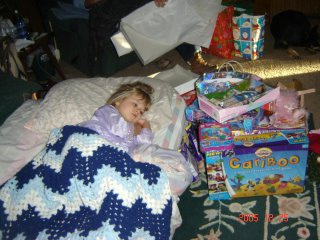 Twas the day after Christmas.....the house was a pit.
the children were fighting and none of the clothes fit.

I remembered that little line from a newpaper article years ago. The day after Christmas is always a bummer. Our holiday was good but not great. My first clue to the crisis was Ari refused to eat anything including the goodies laid out on Christmas eve. She then crashed at 6:30 pm. The next morning, Santa came and Ari had 103 degree fever. Ari spent the entire day sleeping, on and off and she asked me to open her presents for her while she watched. It seems she has the flu, she ran a fever up to 103 until this morning. She's coughing (deep chest cough), stuffy nose. sore throat, achy muscles. Her temp was 99.5 earlier today and she's grumpy and eating a little so I think she's improving.
I wouldn't have brought her up there and exposed her to my stepdad (undergoing chemo for terminal cancer) had I known she was going to get sick. He's hanging in there but not doing great.
But it was good to hang with my mom, mt sister, and her fiance'. We played dominoes and ate too much and made the best of it. Hope Ya'll had a good Christmas.

Sorry to hear about Ari's condition. You're a good mom.