a Special kind of hell 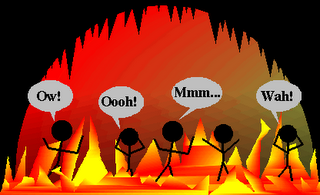 I'm assigned 5 patients in one shift.....here they are.

1 Elderly gentlemen showing new neurological deficits....weakness on the right side, pupils dilating sluggishly, Nystagmus, sometimes he could answer you sometimes he couldn't. Total care. Doctors think it was all side effects from a med he WAS on. Doctors were notified of changes...I was worried all day.

1 middle aged women who happened to be a prostitute who was also thrown from a moving car with a broken patella and road rash...You'd think she would be on the trauma floor but God Forbid should they take anyone who might be in withdrawal from CRACK. The whole morning she cussed and yelled at us, refused everything (except pain meds) until finally I talked the doctor into some Ativan. (took me three calls and stopping the MD in the hallway but I did it). She was a new person after the Ativan.

1 middle aged man with severe asthma exacerbation. Enough so that he would De-Sat into the 70s with the oxygen off. He was my only compliant and somewhat pleasant patient.

1 middle aged man with End stage renal disease....seemed nice enough until I wheeled him to dialysis and THEN he decided to refuse it. It took me, the dialysis RN and the Nephrologist to talk him back into it. The Doctor got tough....Literally said "OK...then go home and die then" when suddenly the patient had a change of heart. This patient was incarcerated....had 2 deputies at the bedside.

Last but not least....1 middle aged man ALSO with end stage renal disease ....this one confused (Kept calling to ask for the "OhnoPogo Man" After trying to reorient him several times I finally told him the Ohnopogo man had the day off....and he stopped asking) ,
incontinent (the world's largest code Brown on record....I guarantee),
forgetful (he would call to be turned.....every 5-10 minutes, forgetting that we just did it) Never mind that there was absolutely nothing wrong with his arms and legs and on admission he could walk fine.
The man had a history of "faking paralysis" according to his doc. He drove me the most insane.

I've never had to be so assertive, stern, and patient ever in one shift since my career started in Nursing. It was a special kinda hell....seriously.

I've just conclusively decided that my choice to be in IT instead of medicine was the best for my mental health.

here's a link to my weekly newsletter for nurses:

I had to laugh! I know you live half a continent away, but I swear I took care of the same man that fakes paralysis just a couple of weeks ago! Drove me nuts, too. Funny how he couldn't do ANYTHING with his hands except find and push the call bell.