There's a new ailment going around....It's called Graduate Nursitis. It's kind of like Senoritis only with less partying, but it carries a lot of similarities. I thought I would take this opportunity to educate. Symptoms include:

*Procrastination-Hallmark sign
*Being easily distracted from studies for long periods of time
*Pounding headaches at the sight of a nursing textbook
*Doodling pictures (non medical ones) instead of making notecards
*Deciding the day before a test that it would be a great time to catch up on all the phone calls you need to make
*Intermixing studying with games of Mahjong (and others) at www.pogo.com
*Designating stuff like laundry and dish washing at a higher priority then studying
*Tachycardia/ anxiety about graduation followed by the later signs of
indifference and a general feeling of hopelessness and loss of control

Diagnostic tests:
Based on symptoms
Labs: Possible decreased Iron, Protein, and Albumin from forgetting to eat
Upon examination:
*Hair may look "frazzled"
*Marked increase in "worry" lines on forehead
*Fingernails may look chewed down to the quicks
*Suborbital edema may be present

Treatment:
* Graduation and passing the NCLEX
*At least 2 week therapeutic vacation to a tropical island or other location of patient's choosing.
*More then 5 hours of sleep a night
* Sex (controversial)


Yes, I am a Graduate Nursitis sufferer, this past weekend my symptoms had exacerbated.

I made an 86 on my test today....not too bad but could've done better.

Is it May yet? 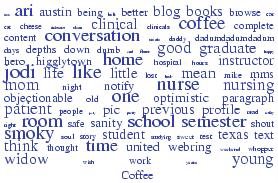 I have been lurking for a few months - found your blog on nurseblogs. You amaze me.

I am starting nursing school in June and can't believe I'll ever be saying "I"m almost done." August '07 for me.

Thanks for sharing your journey.
Signed, A fellow mom and soon-to-be nursing student

Thanks WW Happy V Day to you too. (I still hate the holiday but don't begrudge anyone else) :)

SNJack-
Thanks for lurking and for commenting, good to see a fellow Austinite, You're about to start a 13 month program? Good for you! Let me know if you have any questions or just need to vent. :)

Another freakin' brilliant post, dear. Good luck in the next few months. I know you can do it. You've come this far; come a little farther, as they said in Shawshank Redemption (which I'm sure you've seen, right?). And I just had to chuckle at the "sex" treatment! Zing!

lol, you are funny! Not much longer now, just keep telling yourself that!!

It will be May before you know it!! Congrats ahead of time. I too am suffering the same but I have a little over a year to go before I finish my FNP.. Can't wait!!

This little junior here is just now getting to read your blog. Too funny!

Hang in there; my senior pals are going through the same thing. We juniors suffered hard last semester (as you will recall)!