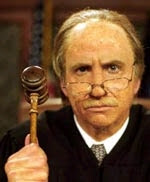 I was thinking the other day about writing a post about the judgements nurses and doctors make with patients. I wasn't sure how to lay it all out and coincidentally came across Third Degree Nurse's post about a similar subject.

I've heard a lot of comments in the past about what patients do to put themselves in the hospital.

"Why do these people drink themselves to death"

"He has COPD but thinks it's OK to keep smoking"

"He has Diabetes but he won't follow the diet"

"He's been hospitalized 4 times this year detoxing, he doesn't learn"

Even as I watched a liver patient lay there unresponsive and dying I heard an experienced 20 yr nurse say "If he had only stopped drinking..." in front of him.

Maybe it's my personal and family background in addictions that keeps me from even thinking these things. I just don't. When I hear patient diagnoses it doesn't occur to me to think what caused them....just how to care for them.

It's natural for anyone to look for blame....it's human. If we look for a reason it prevents us from doing the same to ourselves. We can tell ourselves that it won't happen to us. Prevention is important.

However, it doesn't always apply.
When I tell people that Mike died of Oral Cancer, the first question asked is always "did he dip?" (use chewing tobacco). He didn't. Diagnosed at the age of 21....there's not much one could do to cause it....it just happened.

I've met widows of victims of lung cancer who didn't smoke.
I know people who are overweight because of their thyroid gland and not because of their eating habits.
I've met a few Liver disease patients who never drank.
Sometimes it just happens.

On the other hand, there's those who drink because they've had a really hard life. They smoke because it's the only way they know how to cope. They eat too much because they are really sad and depressed.

In Nursing you have to check your assumptions and judgements at the door. A nurse is there to take care of the patients needs now and hopefully teach and encourage the patient to not damage their bodies further....if that is the case.

The trick is to remain compassionate, empathetic, and caring despite what caused the patient to walk in your door. Don't avoid the patient because "he deserves what he caused". And bite your tongue.....I guarantee the patient knows why they are there.

It helps me to remember to never judge a person unless you've walked a mile in their shoes.

I guess what I'm learning is that in order to be a good nurse, you have the patient's past, but really and truly DEAL WITH THE PRESENT. That means minute by minute stabilation of a patient if that's what it takes, and then TEACHING and education as tertiary prevention if application.

One analogy is the car wreck. Do you only stop and help people who weren't drinking at the time of the wreck?

I've found that while it's impossible to eliminate my biases, I'm able to treat the patients with care and respect even when I'd really like to give them a peice of my mind. I'm sure my attitude sometimes comes across as cavalier, but it's only through the talking and laughing that we're able to move past our opinions and do what needs to be done. If I couldn't let it out to those who understand what we go through, I think I would eventually take it out on the patients... can't let that happen!

I never realized you lost your husband so young. I'm very impressed with your strength and resolve. You are an inspiration. :)

glad I found your blog - nurses are special people, and some of the most caring in the world.
now I will go read the 'story' of your late husband.
peace to you

Third Degree Nurse: I am aware of a former local doctor who, in fact, refused care to one or more patients because of alcohol on the breath. The case I'm most aware of was urgent care, and was in a rural community where hospital/ER access was minimum of 45 minutes away.

I don't dare go into further detail, knowing the personality of the doctor in question, but the condition had nothing whatsoever to do with alcohol intake. The doctor was just violently opposed to any use of alcohol under any circumstance.

Well said. Judgment is not a therapeutic nursing intervention. It clouds a nurse's critical thinking. We know what brings patients in, and why, but the person lying on the stretcher is not merely some fool who drank a fifth of bourbon a day for forty years, of a 3 PPD smoker for fifty years. That patient is a human being, imago Dei: the very image and likeness of God. Unhealthful, unwholesome, unsavory, and unlikeable, perhaps; but nonetheless worthy of being treated with great dignity and respect.

It is good to have that kind of compassion.

Good for you. Can you believe that once when I told a nurse that I had thyroid cancer, she asked what I "did" to get that. As if I was being punished and deserved it sonehow.

Thank author, fellow author.
I really enjoyed this article.
The author, I beseech you write more