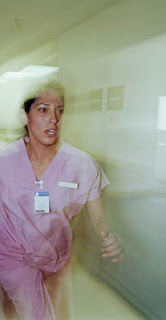 CRT-critical response team. At our hospital it's a Seasoned nurse (the charge from ICU or ER) a Resp. Therapist and a house supervisor. They are called when a patient hasn't coded yet but has had some downward turn or when something just doesn't seem right. That way the nurse is not alone.

I've called 2 CRTs in the past month, my first 2. The first one was when I had floated. The patient's BP dropped suddenly into the 70s over 30s.

The other was last week. My patient with Liver Disease had an Ammonia level in the 200s (Outrageously high) and became unresponsive and had periods of Apnea. The night nurse had done nothing about this but I was not comfy handling this situation on my own and I thought he needed a higher level of care (ie. a monitored bed and a floor where the nurses had less then 6 patients each)

The first CRT made me feel foolish, all we did for the man was get a reliable IV in him ( a PICC) and started pushing fluids into him. The fact that this man looked like a hospice patient seemed to escape the team. The second one was different. Good things happened. The team agreed with me and had him transferred to one of our Critical care floors. I like that we have this Pre-code system.

In the old days a nurse was left alone to deal with a gradually crashing patient and couldn't "call a code" until the pt stopped breathing.

We have the same pre-code type team in my hospital. It's awesome! You almost never hear a code blue called since they started it last spring.

This seems like a better safety net than not having anything else in place before calling a code. I would be interested to look at studies of hospitals implenting something like this, to compare patient outcomes, the number of codes called, etc.

Our ICU manager resists doing a formal CRT because she's afraid it will take responsibility off the individual nurses on the floor for calling a doc if CRT repeatedly comes in and takes over. But she strongly encourages any nurse who's having problems (that paging a doc isn't working to correct problems or the doc isn't taking the nurse seriously) to call the ICU for the charge nurse to come up and take a look or to page RT to come take a look and they do (so we do have an informal CRT). Which most floors in my hospital also have a charge nurse who doesn't take patients unless we're in total overload so getting a floor charge nurse in to help isn't really a big problem.

We don't have that many codes either because our floor nurses and their charge nurses are on top of the problem and get them down to ICU before they're in big trouble and the vast majority of our doctors take all the nurses seriously.

We have something like this at my hospital, too, although fortunately it is rarely needed on L&D. It's supposed to cut down on the number of codes called on the regular units, which is a good thing, as you say, for nurses with huge patient loads.
We did have a couple of patients in pulmonary edema a few weeks ago... one had a dedicated CC RN to watch her art line and ECG. She was scary sick and almost went to the ICU, but we were able to relieve the fluid overload with lots and lots of Lasix. Ugh.
N

In our place, it's called Rapid Response. And I LOVE having it. It's got to be one of the best ways to prevent patient mortality in the hospital I've ever heard of.
/jo

I have done research on the effectiveness of Rapid Response Teams and the IHI's instigation of the 100,000 Lives campaign.

The numbers are phenomenal. Just having an RRT in place reduces a hospital's mortality rate by a staggering 30 percent.

I am happy to say that my hospital has such a team. It's a huge benefit to the patient and to the floor nurses. You may have guessed that I am a big fan of the teams.