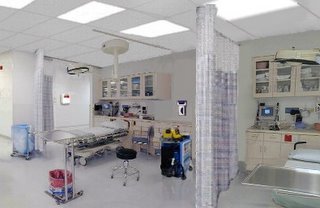 I've been busy. That's the only excuse I can come up with for not posting in more then a few days. Clinicals went well last week and I get to go to the ICU this Wednesday. I'm a little apprehensive about it as there is SO MUCH more going on in the ICU. Since my experience has been predominantly Med/Surg floors, the mere thought of ventilators, arterial lines, and rotating beds really scares the socks off me. Hopefully it will be an educational experience though, unlike my ER experience.

I have an interesting "thing" I'm doing tomorrow. When I worked a shift last week at my hospital, our staff educator approached me about doing a Photo shoot for a promotional thing. She already had a few nurses onboard but need a few CAs as well. I don't know why she picked me as we have quite a few much cuter and younger CAs on my floor but maybe it's the whole RN school thing. Ya know, they can say "This is Jodi, CA II who works on the blah blah floor, she's about to graduate RN school." I think it probably looks pretty good for a hospital to show off someone like me who moved up from Clerk to RN.....and still want to work for them when they could go anywhere else.
I met a CA the other day, a really good one I should add, that started as a Housekeeper. She was telling me she wanted to go to Nursing school. She was apprehensive saying she shouldn't in her 40s but I tried to talk her into it. There are quite a few 40 somethings and 30 somethings in my class, I would say the majority. Anyhoo, I'll let you know how that goes.
I've also been busy having taken on the task of planning our class photos. I remember when I started this journey I went to an information seminar on the program. I must have spent 30 minutes in the main hall looking at all the graduates photos. I was mainly looking for people at the hospital I knew but I also couldn't wait until my picture was in that hall.
Well this year, without any announcement, the school decided to stop organizing the photos. So I took matters into my own hands and have scheduled a photographer to come out and take our pics and put them into a compilation we can buy and give to the school. This guy actually does youth sports league photos but he's gonna come out and do a photo shoot at our school after class. We, students went through 4 semesters of near hell, so if it kills me, we are gonna be on that wall, DagNabbit!